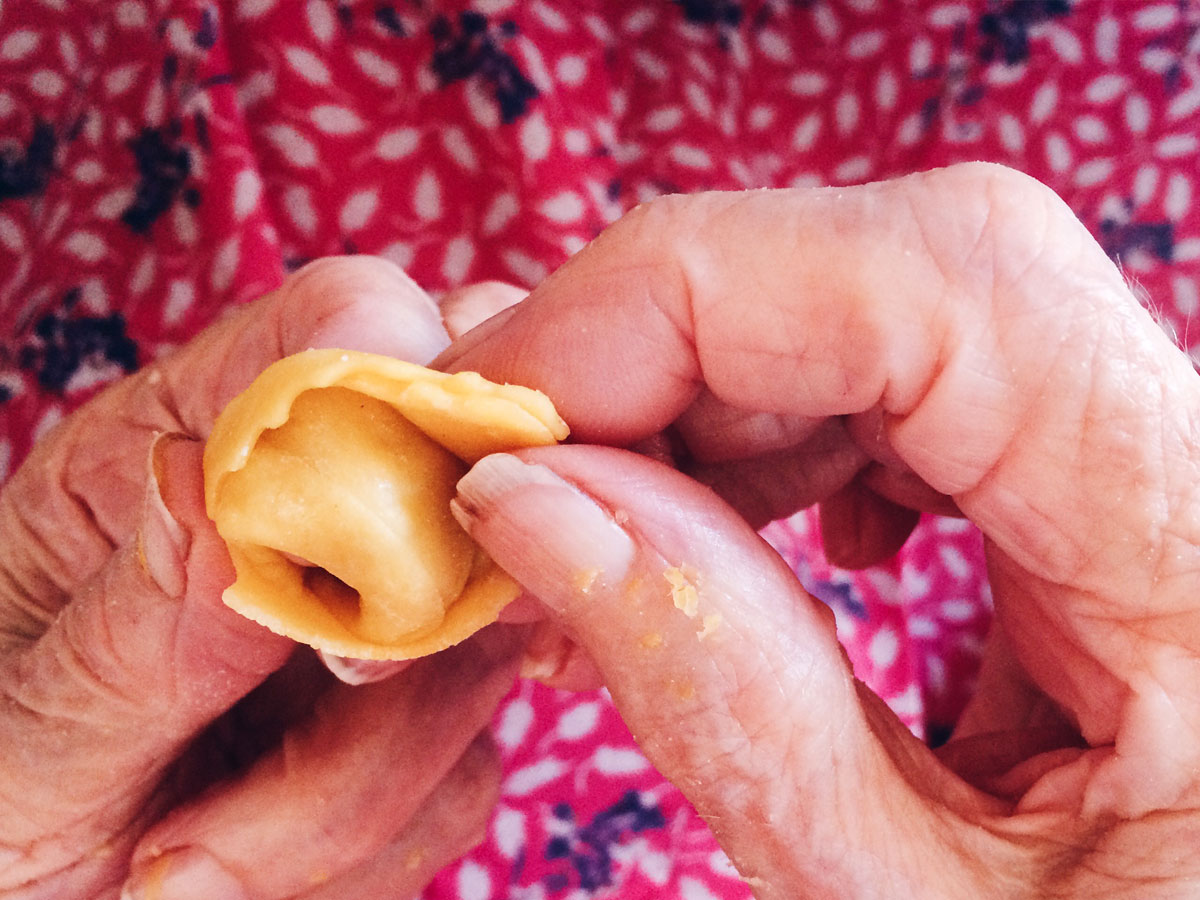 When, in 2015, I wrote this article, I felt I was very fond of it right away. Reasons are many. First of all, because these few lines are dedicated to my lovely grandmother Anna, who passed away in May 2018, but at the time of the writing was 96 year old. She was a special woman who, despite the passing of time, has made everything to respect the good habits of the traditional “rezdora” (a Modenese word to indicate a sort of “queen of the house”). Then, because I will tell you about Tortellini (those of my grandmother) a food that Modenese people have written in their DNA and that represents the tradition especially in this festive period 🙂

I hope to be able to convey at least part of what these lines represent for me, especially since my grandmother has died and I would like to keep her memory alive as much as possible.

My grandmother is 96 years old and every day that I spent with her is a precious gift. Precious it’s also to see her at work, even if with a great effort and with the massive help of my mother, who makes the “dirty job” in these preparations. Now, my grandmother is the mind and my mom her arm.
I haven’t really taken something from her cooking capacities, I apply myself if it’s necessary but I haven’t the habit of rolling out the dough, undertaking something I’m not sure to be able to complete (like these 10 eggs of Tortellini ; ) ).
However I’ve decided that this time I would be the witness of this preparation in order to learn something, to document it and to stop the time, spending a special moment, that I want to remember in the future, with my grandmother and my mom.

I believe that most of Emilia’s people (but probably they are not the only ones) can understand what is the real meaning of the expression: “grandma’s Tortellini”. It is a sentence that instantly evokes the concepts of family and tradition, which takes you back to your childhood, to those Sundays when you went to your grandma’s house.

In Modena Tortellini are a typical food for Christmas even if they are prepared and eaten all the year.
Because of it’s almost Christmas, I want to write down my grandmother’s recipe.
Maybe you would like to try it at home or you simply would like to listen to this beautiful story 🙂

The origin of Tortellini

For those who ignored it, even if it seems me impossible, Tortellini are a stuffed egg pasta typical of Modena and Bologna.

As Wikipedia explains, the origin of Tortellini is obscure and their paternity is still disputed between the two cities.
The most credited place for the birth of Tortellini is the village of Castelfranco Emilia (since 1929 inside Modena’s province), on the Emilia Street, halfway between Modena and Bologna, which annually in September organizes the “Tortellini festival”, with the motivation of being their birthplace.

One of the legends about the origin of Tortellino tells that it was a host of Castelfranco Emilia, owner of the Corona Inn, who invented this special food. The man, peeking through the keyhole of the room of a noblewoman who was his guest, was so much fascinated by the beauty of her belly that he wants to re-make it in a culinary version. Today, there is a bronze statue that celebrates this legend in Aldo Moro square, in Castelfranco Emilia.

You can read the recipe of the traditional Tortellini from Castelfranco also on the site of the town, but now I’ll tell you how I made Tortellini with my grandma and my mom.

In my mother’s recipes book it is written…

The recipe is for 2.5 kg of Tortellini (in Modena it seems than less than 10/12 eggs it’s impossible to start anything 😉 )

Ingredients for the stuffing:

How to cook Tortellini: the stuffing

Cook the minced pork with the butter until it become brow. Let it become cool. Once cooled, add the minced ham and Mortadella. 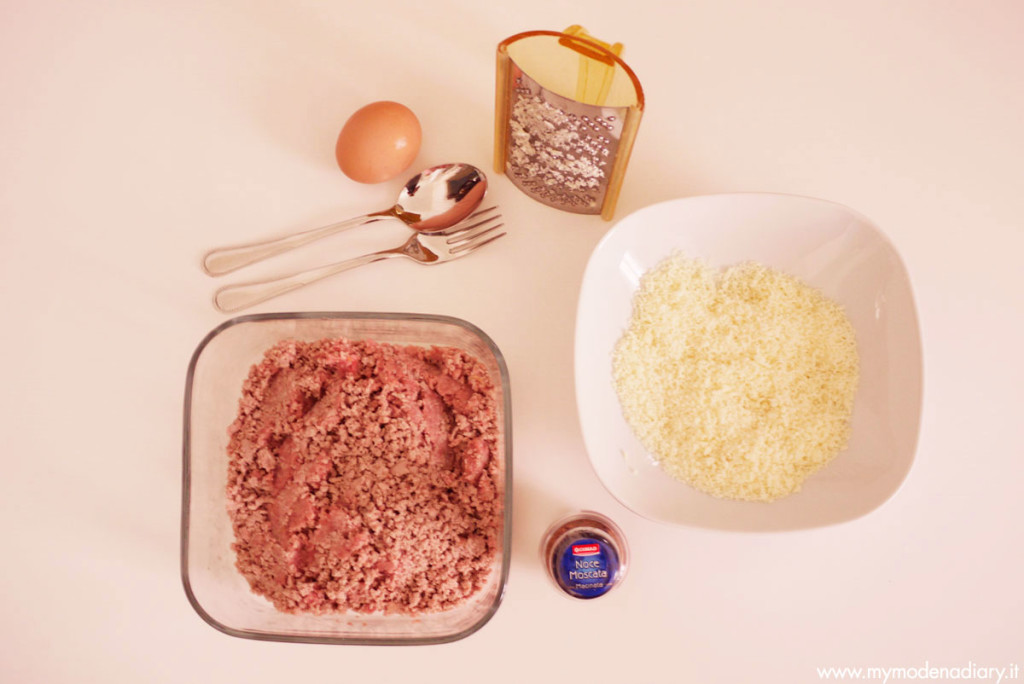 Then, add 1 egg, the Parmesan cheese and a pinch of nutmeg, salt and pepper until it is enough. Mix it.

How to cook Tortellini: the fresh egg-pasta

Pour the flour on cutting board and create by hand a hole in the center so to get the classic “fountain”, where you will add the eggs. 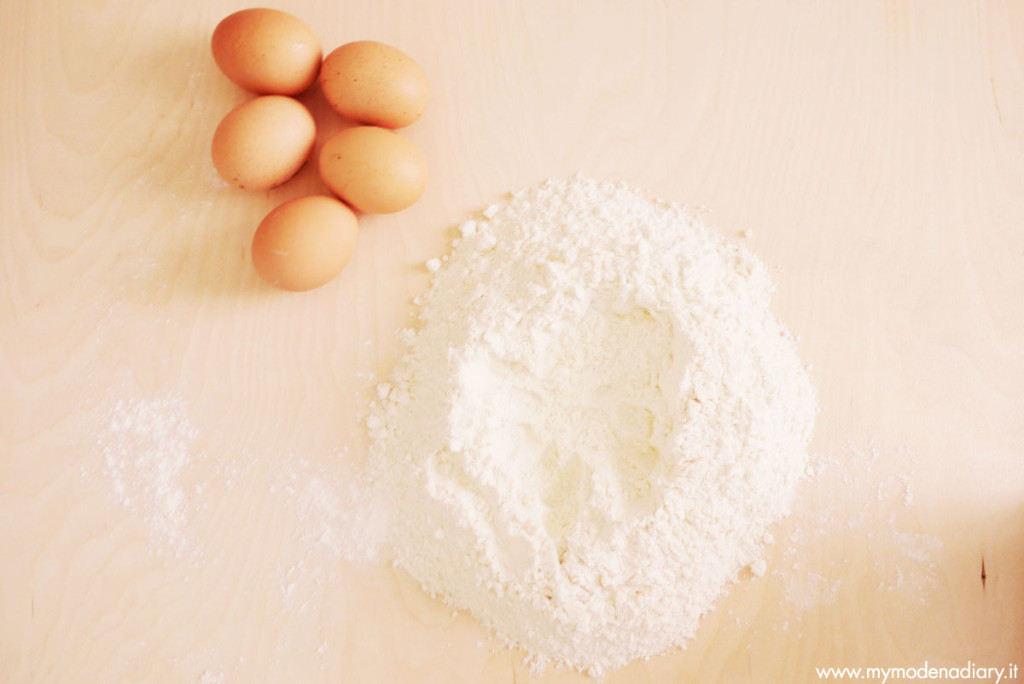 Beat the eggs with a fork, then started to incorporate the flour with your fingertips, starting from the edge of the fountain.
Work with your hands the dough for 15-20 minutes, mixing the ingredients well until it become soft and homogeneous.
Give the dough the shape of a ball.
And now it’s time to roll out the dough!
You can help yourself cutting the ball that you have obtained in order to reduce its size and make different pieces.
Begin, then, to roll out the dough with a rolling pin until you get a large disk of a uniform thickness and right for its introduction in the machine (we still have a manual one ; ) ) . 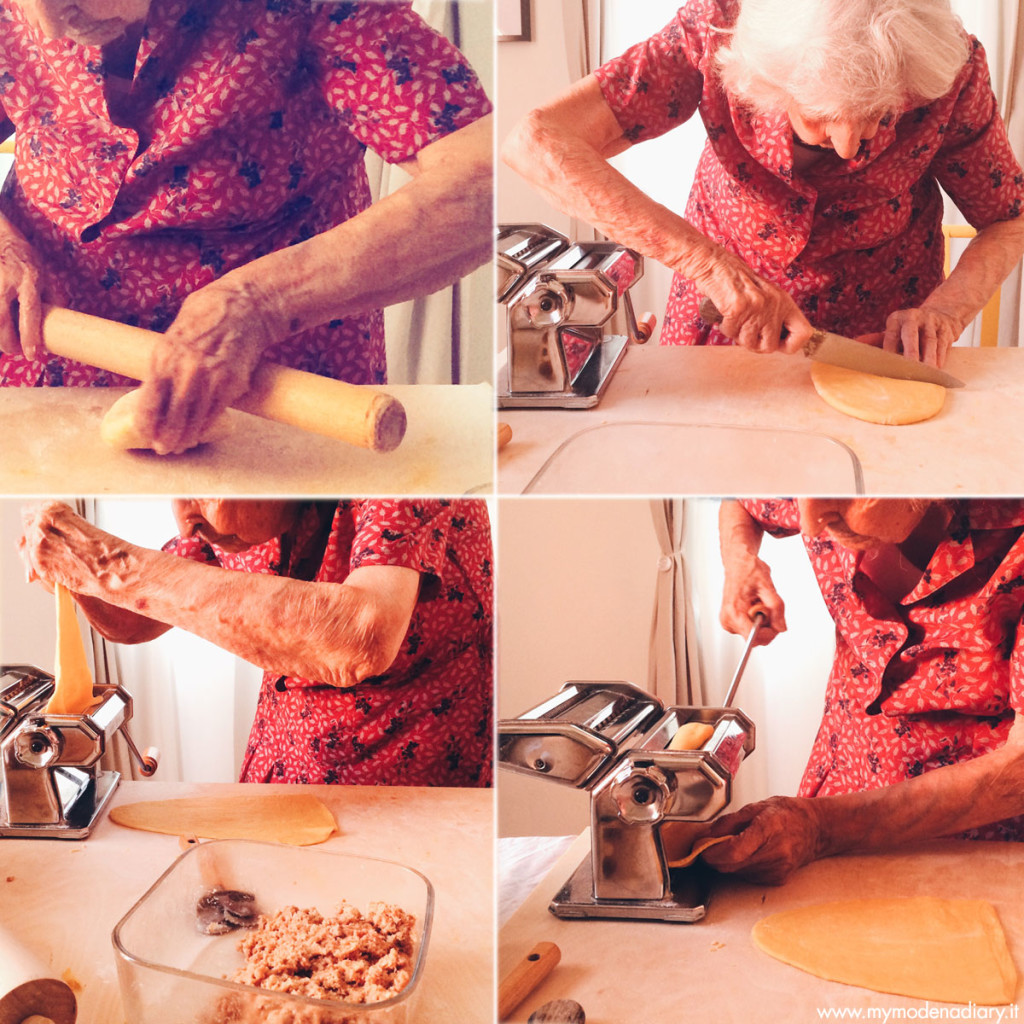 Once you get a fine filo dough, cut it forming squares with the help of a wheel.
Remember that real Tortellini are quite small, so the squares shouldn’t be too big. Now, put in the center of each square of dough some stuffing.
You are ready to close Tortellini… bend the square for the diagonal turning it into a triangle. Make its edges join together.
After tightening the corners of the longest side between the thumb and forefinger of both hands, rotate the triangle of dough around the index of the left hand with the right hand. Unite the two corners and tighten them until they fit together. 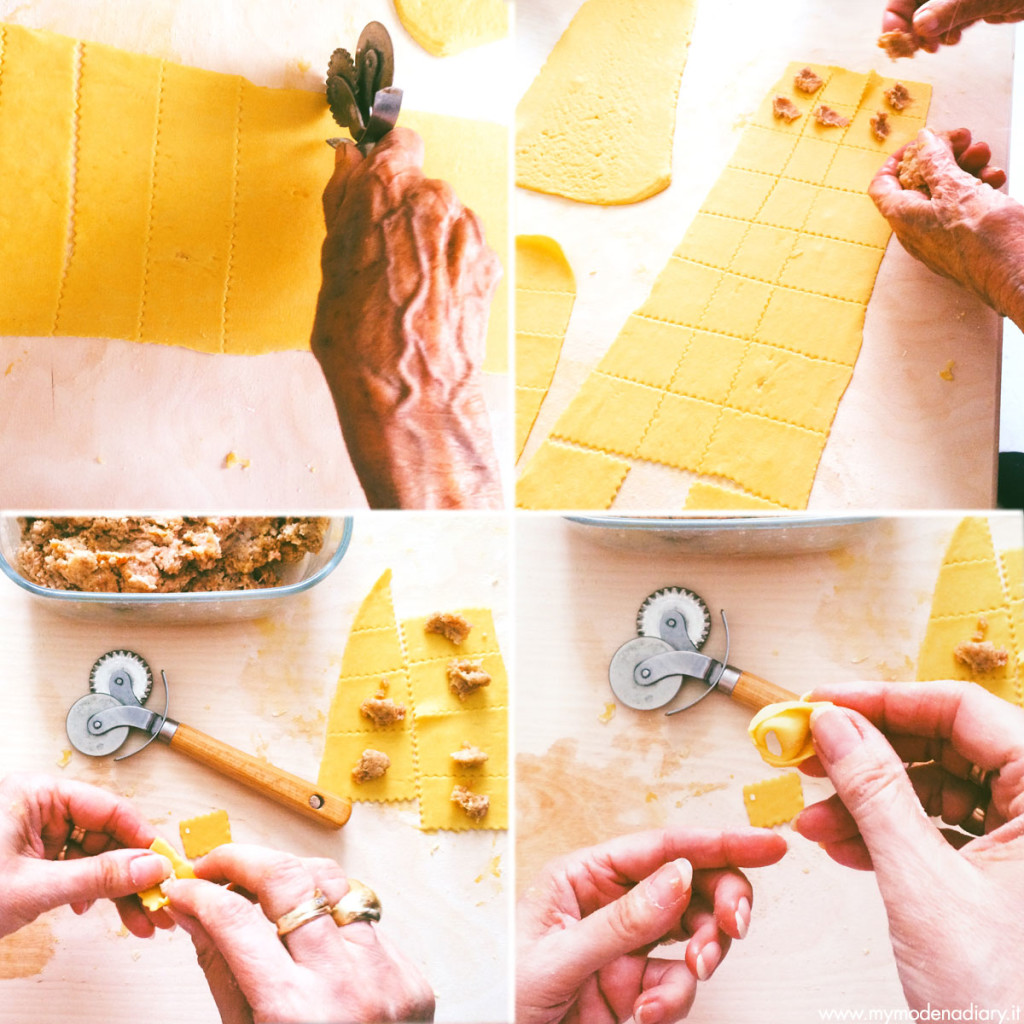 It’s not easy the first time. The closing speed depends on the experience and your manual abilities. My mom and my grandmother go like two trains… me… I’m not so fast, but my shapes are fine. This is one of my Tortellini, it’s nice, isn’t it? 🙂 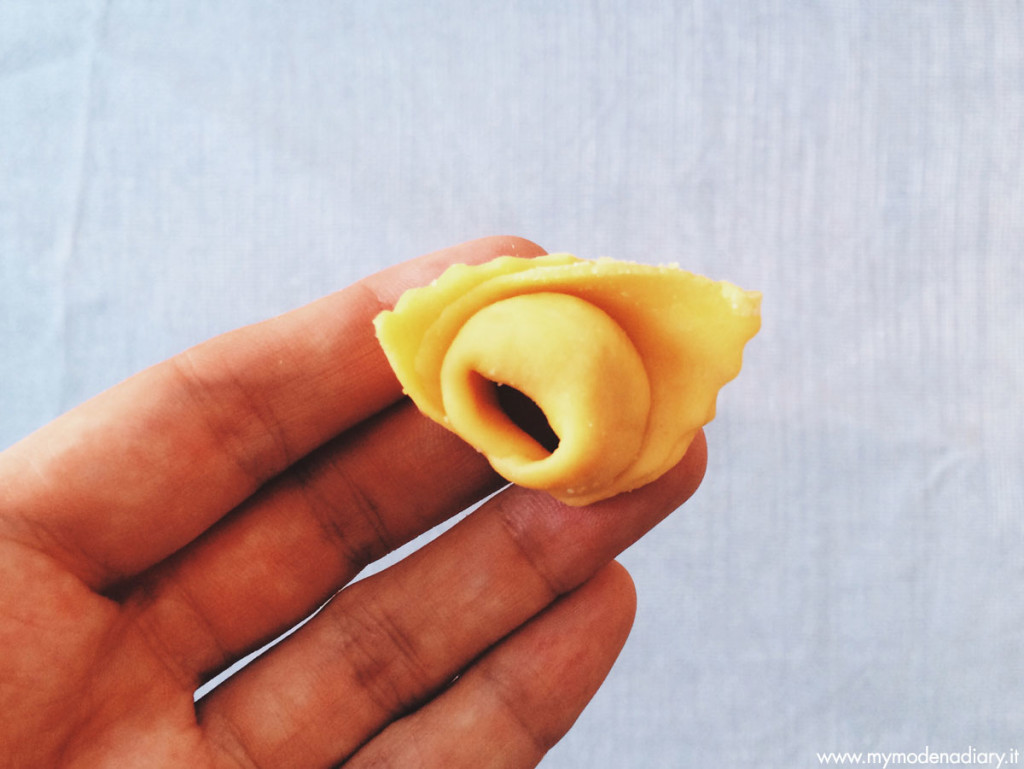 Once you finish all the stuffing and the dough, you will have prepared more or less 2/2,5 kg of Tortellini! 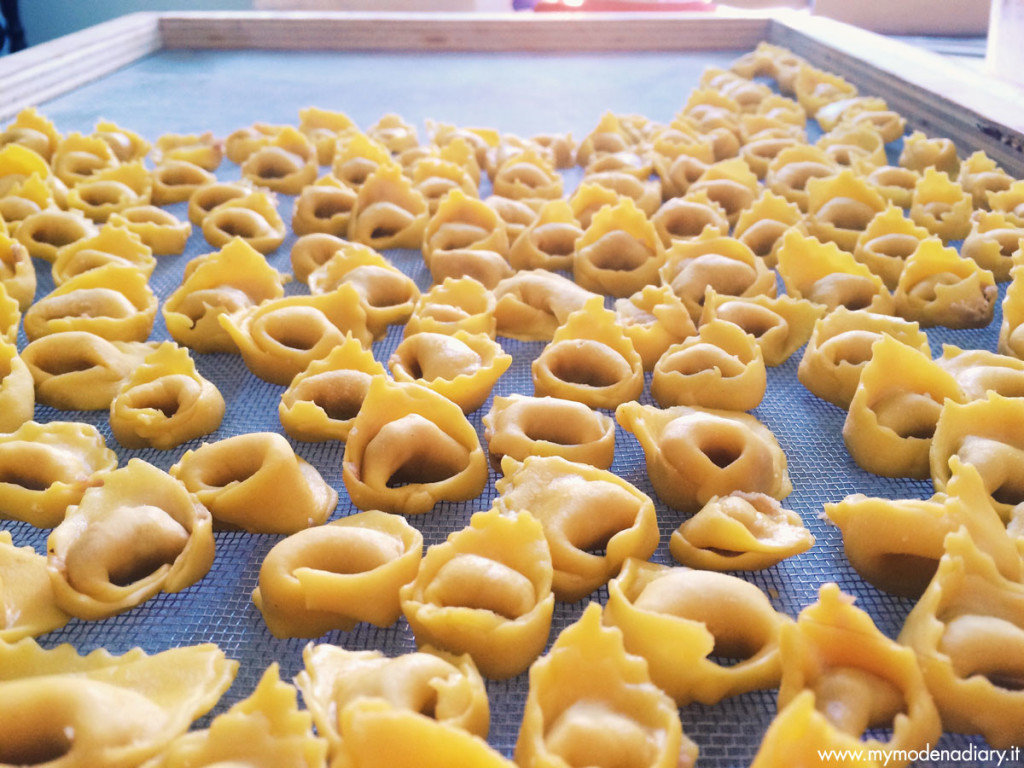 There is also a Christmas variant where instead of chicken you can used capon and to the beef you can add a piece of tongue. 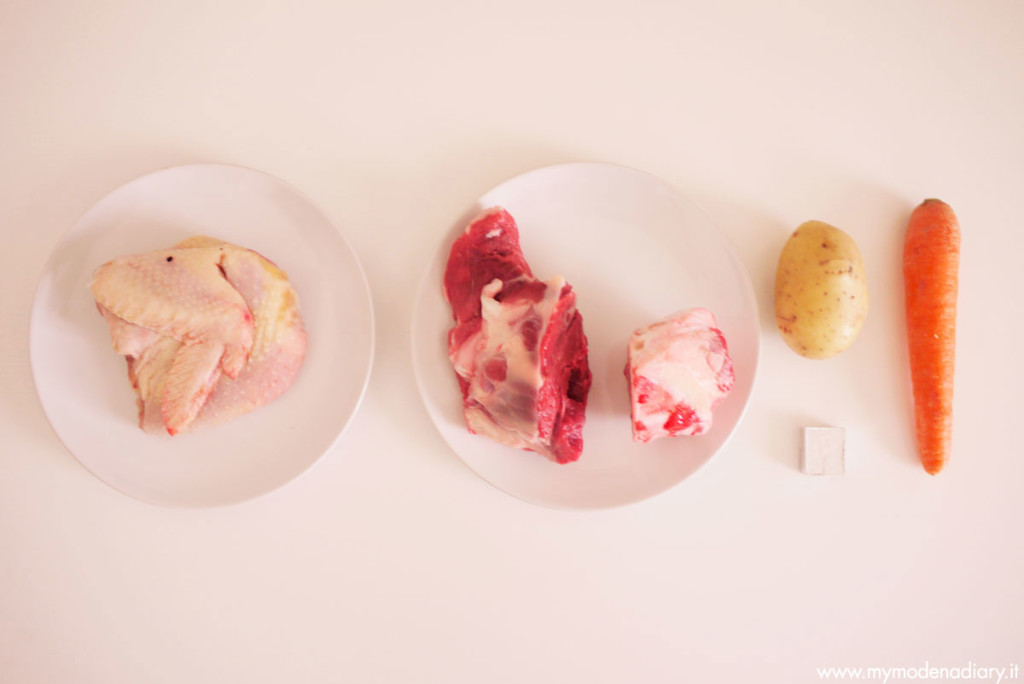 Peel the potato, the carrot and put all the ingredients in a nice pot with enough water (3/4 of the pot). Cook it for 1 or 2 hours (my mother says that more you cook it more it’s good). When it starts to “foam” remove the spume in order to eliminate the fat and obtain a clearer broth. 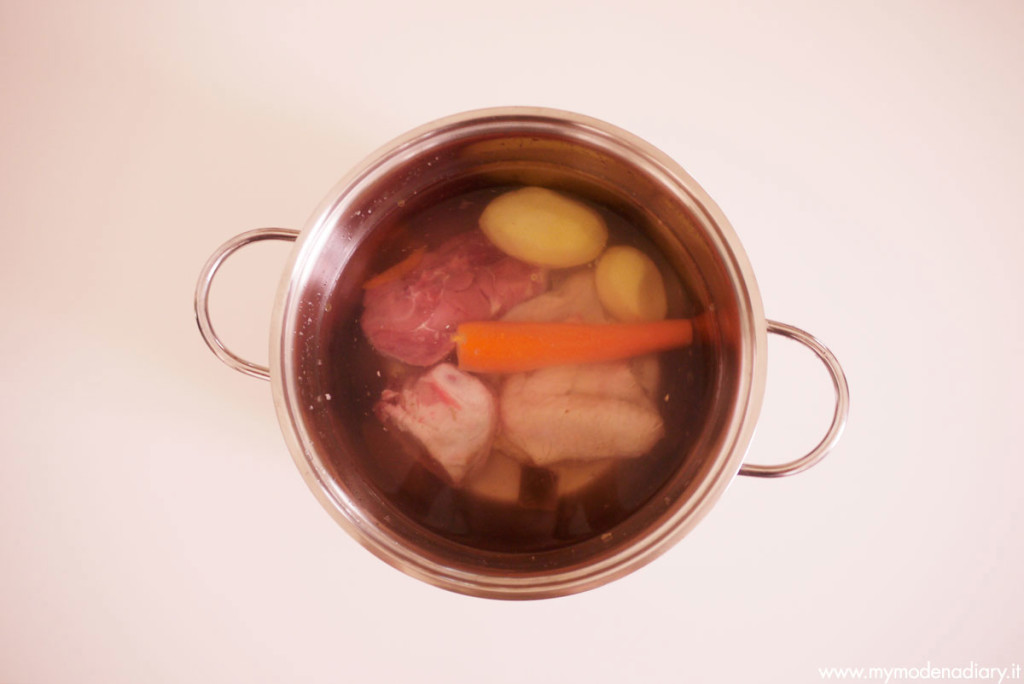 Once it’s ready, remove from the broth the ingredients remained and try to filter it from the impurities with a colander.
If you don’t use it immediately, stored it in the refrigerator. You can heat it later.

Heat the broth until it boils and then throw Tortellini in. Cook some minutes, about 5 (but also it depends on the thickness of the pasta).
Serve them with the broth and, if you like, add a good sprinkle of Parmesan cheese. 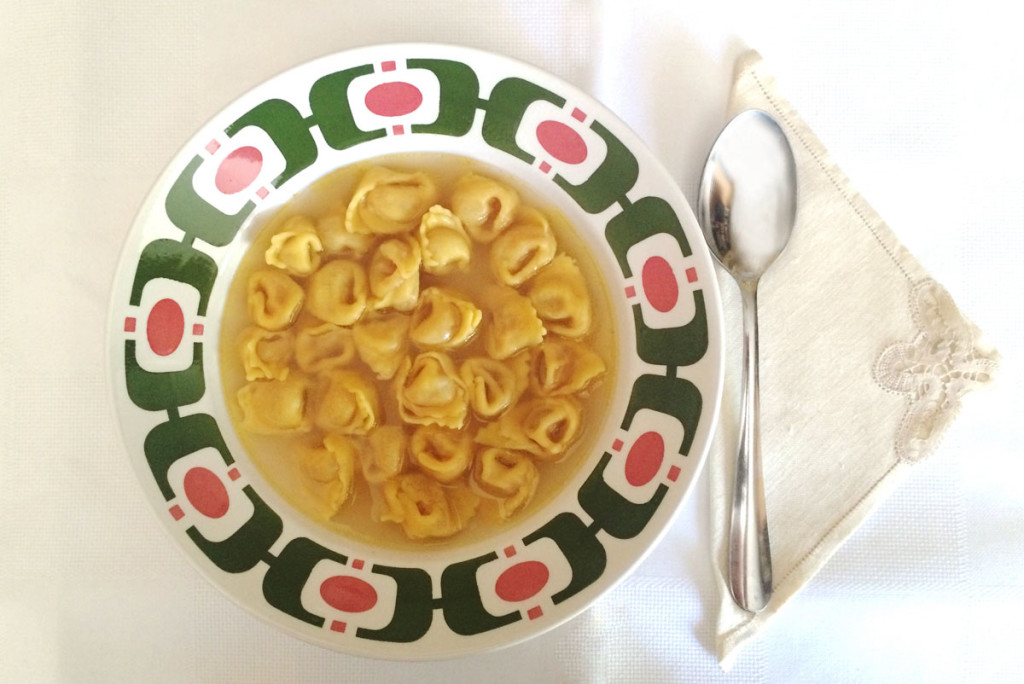 And now enjoy your meal! Enjoy everything until the last sip of broth, it will be sublime 🙂

Do you like to learn cooking Tortellini?
Book now your market visit and private cooking class on Get Your Ride!

Tags | Modena Food, Not to be missed, Stories of Modena
1 0 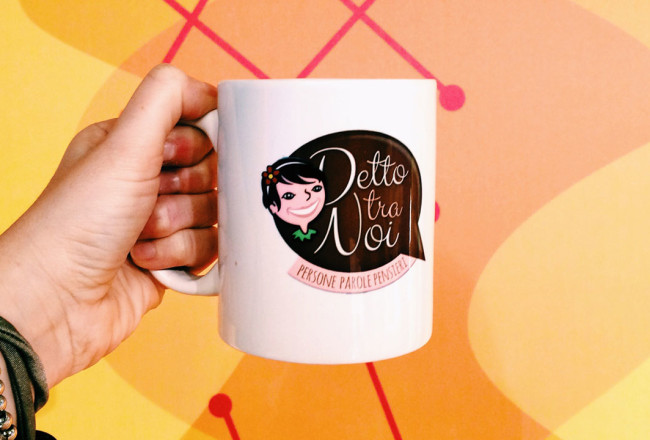 How it’s exciting being in a TV program: My Modena Diary goes on air! 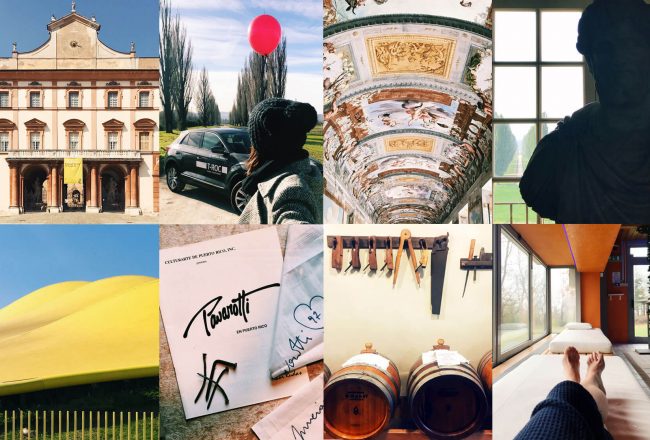 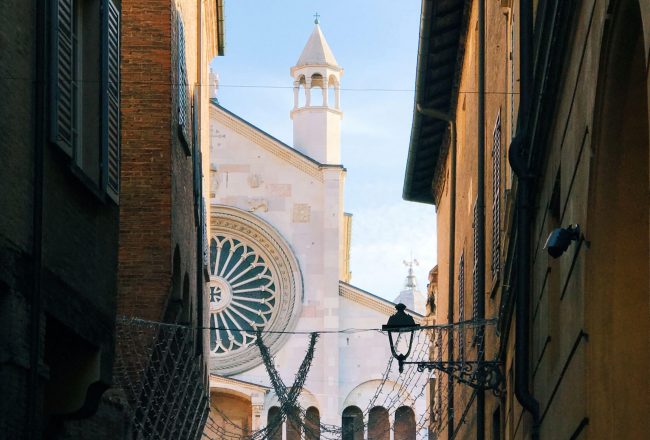